I have always been a baker. Puttering around in the kitchen baking stuff is one of my favorite ways to while away an autumn weekend afternoon while Jim watches football. With the celiac disease and my low-carb, paleo diet, however, I stopped engaging in that love. It’s only been recently that I’ve started tinkering with baking once again.

This recipe came to me in a flash of inspiration a few days ago, and I decided last night to give it a try. I was worried about lots of things – tweaking ratios, etc., but the cookies came out really well on the first try. Feel free to mess around with the flavor profiles. I love the way the orange, spice, almond, and chocolate blend in this tasty recipe.

The cookies are paleo-ish – the erythritol in the sweetener renders them not quite paleo; however, if you aren’t baking low-carb, you can replace the sweetener with coconut sugar. It will raise the carb count, but keep the cookies paleo. So it’s a matter of blood sugar vs. staying totally paleo.

Since I don’t eat a lot of sweet stuff, I’m keeping these cookies in the freezer, at the ready for when I need a sweet treat, or when I just want a taste of something completely different. 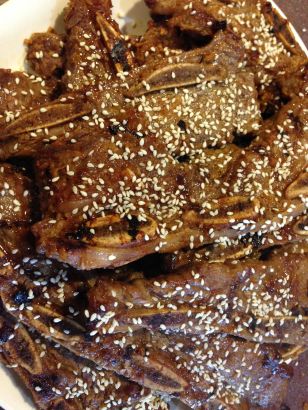 Okay – here’s the deal. I had leftover marinade from my earlier pork belly recipe, but alas, I had no unfrozen pork belly. Not to worry, however. I have about 10 pounds of it in my freezer (yay!)

So anyhoo…I wanted to use the rest of the marinade. Which is why I headed to the grocery store and picked up some flanken-style beef short ribs (the kind of beef short ribs where they are cut thin across several bones).

I marinated them in my extra marinade for a little over two hours, and then I popped them on my Foreman grill, which I consider a very underrated kitchen gadget. You can also grill them on the regular grill or use a grill pan.

Although the marinade was the same, the flavor was very different from the pork belly. The beef was super flavorful. As I was eating, I realized the ribs would be delish with a ginger broccoli stir-fry, but it’s also good with a crispy, slightly sweet, slightly acidic slaw (or why choose? you can do both!) I’ll include recipes for both, and you can decide.

So those are the recipes. Trust me, they’re delicious! But, I just thought of something else that would be really delicious with the short ribs…a bok choy stir-fry, cooked in a manner similar to the broccoli above. You might even toss in a handful of sliced shiitake mushrooms for a tasty low-carb side dish.

I love pork belly. I order ours online at Tenderbelly and cut it into one-pound slabs, which I freeze and use as needed. This tender meat is tasty and versatile. It’s also very rich, so I typically serve it with a side of something that is crispy and acidic, such as a slaw. The acidity and crispiness of the slaw cuts through the unctuous fattiness of the pork. The slaw here is a typical Asian slaw, but you can also try the recipe with a slaw made from julienned jicama or apples, which would taste delicious with an Asian vinaigrette.