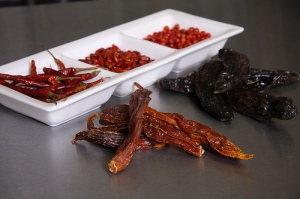 With Tanner off to college and Kevin only here a few weekends a month, Jim has become my primary cooking “audience.” As you may have noticed in previous posts, I spend a lot of time discussing what Jim likes to eat as the impetus for the foods I cook. My Paleo pork chili Colorado is no exception. I want Jim to enjoy the foods he eats so he is more easily able to stick to the plan. His health (and mine) is very important to me.

Pre-heart attack and pre-Paleo diet Jim really liked to eat Chili Colorado at Mexican restaurants. One night about a month into the Paleo diet, he got a wistful look in his eyes and started talking about how much he missed Azteca’s chili Colorado burrito. Clearly a burrito was out of the question, but I figured I had chili Colorado within my reach.

For my first attempt, I had some grass fed bison stew meat in the freezer, so I thought I’d try that. I nailed the spice blend, so the flavors were great, but the bison was just too dry to lend itself well to the slow stewing that happens with chili. This week, I decided to try some pastured pork shoulder instead. What a difference. The fat in the pork added a richness of flavor, and the meat took on the spices nicely.

So now, when Jim gets that wistful look in his eye, I’m ready for him with a nice pot of pork chili Colorado.

Jim is a meat lover. Man does that guy love his meat. If you put meat on top of meat, well he loves that even more. It’s why after his heart attack, I realized that the Paleo diet was the only way to go that would make him happy. I just couldn’t see him subsisting on a nearly vegetarian diet with a tiny amount of meat.

Fortunately, the research on the Paleo diet for people heart disease is very promising. After researching it extensively and talking to his cardiologist, this is where we settled. So far so good. He’s lost 30 pounds and his blood lipids are improving. His BP is low, and he is healthier than he has been in years.

It’s been great for me, too. I have Hashimoto’s thyroiditis and celiac disease. Both are autoimmune conditions, and research is showing that Paleo diets work well for those. Since October 1, I have lost 55 pounds (and still going). I have more energy than I’ve had in years. My celiac disease is under control, and I just feel so much better in general. For us, it has vastly improved our health.

Anyway – meat on meat. I got a little sidetracked there with the whole health thing. And while health is super important, if you’re eating tasteless, unsatisfying food, any diet can be difficult to stick to. Since I am so invested in Jim’s good health–I want him around for years to come–I tailor the foods I make to his tastes. I want to make him do a happy dance at how delicious the foods I provide are. That means that sometimes, I put meat on meat. Which is where I came up with the idea for smoked rib eyes with bacon jam. Because seriously – yum.

The bacon jam is the perfect combination of sweet and sour with just a little bit of spice, while the smoky ribeye is the perfect canvas for it. Jim got a smoker a few years ago for Christmas and it is his pride and joy. If it came down to his smoker or me, I think he might choose the smoker. Fortunately, I’m happy that he spends time outside adding a little smokiness to meat, because it really brings the flavor to dishes like this. If you don’t have a smoker, no worries. Just cook the ribeye (or your favorite cut of beef) on the grill, or however you enjoy cooking it. My instructions below are for the smoker.

I served this dish with a sweet potato that I’d spiralized into pommes frites style shoestrings, fried in lard, and sprinkled with a bit of Himalayan pink salt. If that sounds like a super carby choice, it is not as bad as you would think. One five-inch sweet potato (peeled) in a spiralizer makes a huge batch of pommes frites, and it only has 26 grams of carbs. Between two people, it’s 13 grams of carbs each, minus about 3 grams of fiber for a net carb count of 10 grams. If you do fry up some sweet potato pommes frites, make sure your oil is 375 degrees Fahrenheit before you start to cook the potatoes, and work in batches.

I also added a side of sautéed citrus spinach. I’ll put the recipe below. I can’t actually eat a whole ribeye, or even half one, but it gives me a few meals. As for the leftover bacon jam, roll it in your omelet tomorrow morning or warm it up and put it over a fried egg. 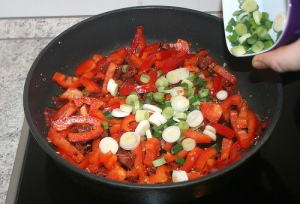 I love spicy food. Jim is a little more reticent. He will eat it, but he prefers it not be too hot. Most jambalaya recipes have a lot of heat in them, making them spicier than Jim’s palate prefers. So I set out to make jambalaya (without rice for obvious reasons) that would fit Jim’s heat preferences.

This recipe turned out perfectly. It had a little heat from the andouille without setting fire to our mouths. If you like it spicier, add more cayenne.

Pork belly is often difficult to come by, but if you can find it, snap it up. For those who don’t know, it’s essentially uncured slab bacon that comes with the skin on the top. With the unctuous fattiness of the meat and the crispy skin on top, it makes a delicious main course. Check with local ranchers to find pork belly, or dig around on the Internet and you’ll be able to find some to order.

In this recipe, the spices in the rub and the acidity of the orange, as well as the crunch of the slaw all serve as a delicious counterpoint to the sweet fattiness of the pork. When I made this, it was the first time I cooked pork belly, so I borrowed the crispy skin cooking method from The Clothes Make the Girl blog. Then, I added my own flavors and spices. Trust me, it’s really delicious and rich! 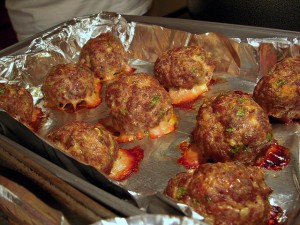 This recipe is not strictly paleo because I use a few non-paleo ingredients. But it’s still low-carb and pretty darn delicious. While I avoid non-paleo ingredients 80 to 90 percent of the time, I occasionally do use them. I like to serve the meatballs with leaves of tender butter lettuce. Wrap the meatball in the lettuce and dip it in the tasty sauce.

For the dipping sauce:

To make the meatballs:

To make the dipping sauce:

Whisk all ingredients together in a small bowl. Start by adding a little of the garlic chili sauce or chili oil, and then adding more to achieve the desired level of heat.

I’m excited to share this one with you. It makes a great special occasion meal. We had it for New Year’s Eve, but you can make it any time. I wanted to wait to post the recipe until I’d fully developed it – wouldn’t want to steer you wrong, but with this combination of flavors it was pretty hard to go wrong.

This recipe is gluten-free, dairy-free, low-carb, and paleo.

For the sweet potato strips:

For the marinade and roast:

For the sweet potatoes:

To serve: After resting the roast for 20 minutes, slice it and carefully remove the twine. Spoon the sauce over each piece of beef and top with the crispy sweet potatoes. For sides, we served garlic sautéed green beans and a green salad.