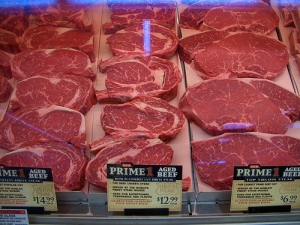 Jim is a meat lover. Man does that guy love his meat. If you put meat on top of meat, well he loves that even more. It’s why after his heart attack, I realized that the Paleo diet was the only way to go that would make him happy. I just couldn’t see him subsisting on a nearly vegetarian diet with a tiny amount of meat.

Fortunately, the research on the Paleo diet for people heart disease is very promising. After researching it extensively and talking to his cardiologist, this is where we settled. So far so good. He’s lost 30 pounds and his blood lipids are improving. His BP is low, and he is healthier than he has been in years.

It’s been great for me, too. I have Hashimoto’s thyroiditis and celiac disease. Both are autoimmune conditions, and research is showing that Paleo diets work well for those. Since October 1, I have lost 55 pounds (and still going). I have more energy than I’ve had in years. My celiac disease is under control, and I just feel so much better in general. For us, it has vastly improved our health.

Anyway – meat on meat. I got a little sidetracked there with the whole health thing. And while health is super important, if you’re eating tasteless, unsatisfying food, any diet can be difficult to stick to. Since I am so invested in Jim’s good health–I want him around for years to come–I tailor the foods I make to his tastes. I want to make him do a happy dance at how delicious the foods I provide are. That means that sometimes, I put meat on meat. Which is where I came up with the idea for smoked rib eyes with bacon jam. Because seriously – yum.

The bacon jam is the perfect combination of sweet and sour with just a little bit of spice, while the smoky ribeye is the perfect canvas for it. Jim got a smoker a few years ago for Christmas and it is his pride and joy. If it came down to his smoker or me, I think he might choose the smoker. Fortunately, I’m happy that he spends time outside adding a little smokiness to meat, because it really brings the flavor to dishes like this. If you don’t have a smoker, no worries. Just cook the ribeye (or your favorite cut of beef) on the grill, or however you enjoy cooking it. My instructions below are for the smoker.

I served this dish with a sweet potato that I’d spiralized into pommes frites style shoestrings, fried in lard, and sprinkled with a bit of Himalayan pink salt. If that sounds like a super carby choice, it is not as bad as you would think. One five-inch sweet potato (peeled) in a spiralizer makes a huge batch of pommes frites, and it only has 26 grams of carbs. Between two people, it’s 13 grams of carbs each, minus about 3 grams of fiber for a net carb count of 10 grams. If you do fry up some sweet potato pommes frites, make sure your oil is 375 degrees Fahrenheit before you start to cook the potatoes, and work in batches.

I also added a side of sautéed citrus spinach. I’ll put the recipe below. I can’t actually eat a whole ribeye, or even half one, but it gives me a few meals. As for the leftover bacon jam, roll it in your omelet tomorrow morning or warm it up and put it over a fried egg.